In 1985, when Glenn Wells was faced with the need and desire to do something completely outside the realm of COOP management, and after having experience with putting together the largest portable aspirator grain cleaner known in the country at the time, and after doing his own market research by driving around the state to find cleaner rental business, the decision was made to purchase a Newton Grain Cleaner and rent it out to various grain elevators. That business was named Mid-Continent Service and Supply (MCSS). With Kansas being in the center of the United States of America and with numerous companies and local airport with Mid-Continent as part of their name, it was felt to be the most logical and familiar name to use. 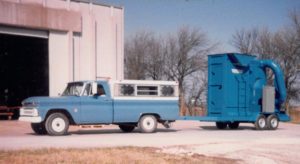 Son Steve joined the company in Oct, 1986. Son Darren in May, 1987. Both boys helped where needed, taking grain cleaners around and doing various service work and sales at grain elevators across the Midwest.

In February 1989, with already having MCSS, owning several Newton Grain Cleaners by then, and due to the need of a manufacturer of it for the company they bought them from, Glenn, along with his wife Donna, and with family help, decided to start their own manufacturing company, Mid-Continent Industries, Inc.(MCII). Naming the company was only logical after already having Mid-Continent as the key name. 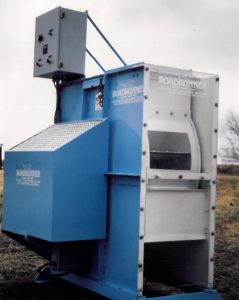 It was not the first time he and his sons had manufactured equipment. MCSS had performed the manufacture of several of the Road Runner volumetric load out device, feed pellet durability tester, and one portable Newton Grain Cleaner, all from either Glenn’s two car garage at home, or at a farm shed. This would also go on as the grain cleaners were being utilized for the rental service all across the country. In 1991, Mid-Continent Industries became the sole owner of the rights to the Newton Grain Cleaner and OEM equipment built. Newton Grain Cleaners are now installed at numerous facilities both portable and stationary across the US, with several in Europe. 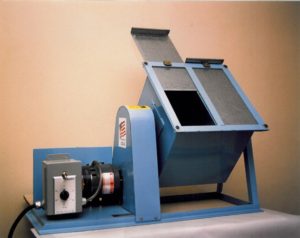 Later that same year of 1989, a COOP manager in Anthony Kansas Glenn knew from his management days called and requested that he build a better dockage tester than what was on the market at the time. Always looking ahead, and always up for a challenge, the idea was entertained. After much research and development from Glenn, son Steve, and shop personnel, the MCi Kicker was unveiled in the winter of 1990, with its first sale in April that same year to Farmway COOP in Beloit, KS, with over 50 more sold that year in the Midwest. MCi Kickers are now all across the US, and several in Canada. The first overseas MCi Kicker was shipped to South Africa in April, 2018 with more to come.

Also in early 1991, yet another former management colleague from Minnesota called and said “Glenn, you need to make that dockage tester automated so we can check our outgoing barley malt. We are unknowingly giving away our large product and need a sizer that will run itself with a sampler and without someone having to tend to it all the time!” Guess you know what happened then! With MUCH MORE shared research and development, the MCi Auto Kicker Automated Grain Tester was unveiled in 1992 with its first sale to Rahr Malting in Shakopee, MN late that same year. It won the award for the Idea Exchange at GEAPS the following year in 1993, and that is when the moisture and test weight were integrated into the system. Now, most of the grading factors are covered, as well as the available option of protein, oil, and starch or yield potential. Today, numerous MCi Auto Kickers are in place, both receiving and outbound, scattered across the US and into Canada.

MCII is known for its quality products, exemplary service, and fine reputation in the grain industry, as well as custom metal fabrication and services. The still family owned company has been able to maintain its presence for over 35 years in total. Glenn tragically passed away in the fall of 2001 due to health problems, but was able to enjoy the success of his visionary and brave endeavor with his family included for several years before passing. Mom is still involved in the company, and has good memories of the company history and her adventurous life with Glenn and now with her sons and her six grandchildren and fourteen great-grandchildren.

Founded in 1989, Mid Continent Industries (MCi) set out to improve grain quality and save producers time and money. MCi continues to grow through research and development.

Articles and product reviews about MCi.